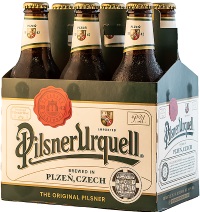 Given its status as the world's first pale lager, it is of no great surprise that Pilsner Urquell continues to be the benchmark for what good lager should taste like. The beer's German name means "original source," which is only too fitting as Pilsner Urquell has become more or less the wellspring for every lager to follow. The brewery itself harkens back to the early 1840s, when Josef Groll, a Bavarian brewer, was hired on by the Měšťanský pivovar (the Burghers' brewery), and was tasked with inventing a new bottom-fermented beer. He accomplished this very feat in 1842. And the rest is history! This golden-tinted lager has a white-bread aroma and taste almost akin to a fresh sourdough and the finish is characterized by just a tinge of tartness imparted by the prized Saaz hops. Pilsner Urquell continues to be a longstanding favorite among beer lovers, not only in Plzeň but across the globe. It's also endeared itself to our palates here at The Austin Wine Merchant. We highly recommend you czeching it out! 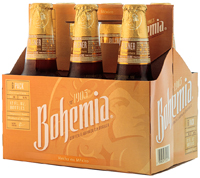 Bohemian isn't only a good ersatz for the plaid-clad, unorthodox, iconoclast, who's been known under various descriptors including hipster, hippie, or beatnik. It's also an adjective referring to the historic Czech province of Bohemia, in whose bounds sits Plzeň, the town, from which the pilsener beer hails. Bohemia is a beer, which attempts to capture and encapsulate that flavor, conceived by Czech and German brewers in the 1840s. And low and behold — it does a pretty dang good job of it! Bohemia pours a light golden color and is accented by notes of fresh herbs. The usage of noble hops lends to a tart, yet refreshing finish, which stays true to its central European origins. Whether enjoyed on its own am Feierabend or paired post-trabajo with any of the excellent Texmex to be found in Austin, Texas, Bohemia is sure to prove a crowd-pleaser and for us easily ranks among the best beers, which Mexico has to offer. So heck, dare to be different and grab yourself a cool sixer of this staple pils.